There I was, just sitting in the backroom of the workshop. The air was swelteringly hot and filled with the smell of sweat from the men who worked on their special projects. It was the end of the day and the last sunrays touched the window. A small window near the ceiling, covered with wood and metal dust from generations of craftsmanship and hard labour. I knew I had to switch on the lights, but I was afraid that the flickering and buzzing of the old lamps wasn’t going to help me to concentrate. And concentration was just crucial for this project…

My first idea was just to see how the paper could endure some special nibs. I took Colorverse Gravity Wave ink because it was the bottle that was the closest to me when I started and I knew it had some sheen. I thought one ink would be fine and did put it in the fountain pens I was going to use for the test:

After my first posts about this project and the input I got from the Instagram community, I decided to enlarge the test with some additional normal nibs and standard well performing inks:

I made a template of 14 x 10 cm (5.5 x 3.9 inch) in an attempt to do the same test on each paper. But as not all is done on the same day, there could be some variation due to the fact that I’m human. I also changed my system a bit during the testing. Also not all paper had the same size so for some paper the template was too big and I tried to give a comparable impression.

Because the Zebra G-flex is a dip pen nib that I forced into a fountain pen it suffered during the testing on some less fountain pen friendly paper. The fine lines weren’t as fine anymore, the ink started to come with a different flow and the tines didn’t align as good anymore. So after 80% of the testing it got so bad that I replaced it with another one. This can be seen on some of the papers, but it didn’t affect the test as such.

First two parameters are rather objective and determine if the paper is fountain pen friendly. For these aspects I looked really on details. One small bit of feathering or just a little spot of bleeding through was enough to lose points.

Ghosting and sheen are not as import for everybody. Some don’t use inks with sheen and some don’t use the backside of a paper, so I consider these aspects as rather subjective. For me they do matter so good sheen and less ghosting gives a higher score. The drying time of ink wasn’t measured, but is in most cases inversely proportional to the amount of sheen.

I also added real subjective scores regarding to how I felt about the paper or certain aspects that I noticed during the testing. I must say that I love smooth paper that lets your nib dance on the flow of ink. I know that some people just like more feedback from the paper whilst writing and are not so keen on real smooth paper.

Writing feeling (W, based on writing with the normal nibs)

Keeping in mind the limitations of the tests I did and my personal preferences (smooth paper and minimal ghosting) the next papers can be valued as best of the test to use for all fountain pens (special nibs and normal nibs). Additional remark: some notebooks/papers are available in different sizes but only the tested size is taken into account.

After testing all papers were scanned as proof of the result. These scans are available in a separate blog post.

An alternative version of the test data is available as Excel-file . In this version there is no final score, and you are able to look what could be the best paper for you (parameters: special nib/normal nib, double sided use of paper, need for sheen, smoothness/responsiveness of the paper, size and ruling). You may use this data as you like, but if you share it, please do not remove the source references. 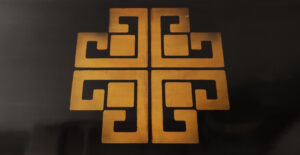 Restoration of a table top 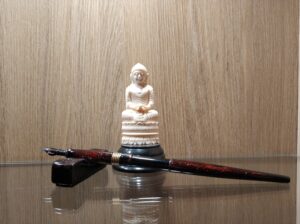 Urushi is a way of protecting objects by applying a natural lacquer that is harvested from the urushi tree. The urushiol and laccase in the lacquer polymerize with the moisture from the air. 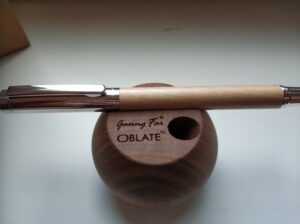 It was the beginning of June and I was having a lazy Sunday afternoon with some friends. The sun was just coming through the clouds,